Stuck between a Rock and a Hard Place? 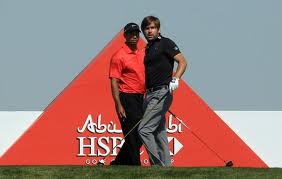 I spent most of the morning, and much of this afternoon trying to think of a catchy title to this blog post (yup this is what I came up with). Tiger Woods is having a better 2012 golf season than pretty much his last three years combined.  He did not win the Abu Dhabi, Robert Rock took those honors, and he took them away from Mr. Woods himself.  Tiger didn’t play bad, but he never got any Tiger-esqe magic going to take on the fast moving, hair flipping, tight pants wearing Rock.  Rock played very well, with only a little stumble on 18 to finish with a bogey and a tournament winning 13 under par.

Rock went on to say that it was a bit unnerving to play against the biggest name in golf.  Rock was able to come out on top over Tiger Woods and reigning US Open champion Rory McIlroy.  Rory’s comments after the tournament: he was happy about his play, and would use the first tournament of the year as a learning experience.  Tiger however told us he didn’t play well, and therefore he didn’t win (thanks Tiger for the recap).  I do love Tiger when hes playing well, but he does not have the charisma and crowd pleasing mannerisms of a Rory or a Phil (although Phil is watching the rest of the Farmers on his couch at home).

Tiger may not be back on top, but he did go win-less for two years, only to follow it up with a win at Chevron to wrap up 2011 and a solid 2nd place to start up 2012.  Only Tiger Woods can follow up a slump with back to back wins (well almost back to back wins).  Good to see you back Mr. Woods.