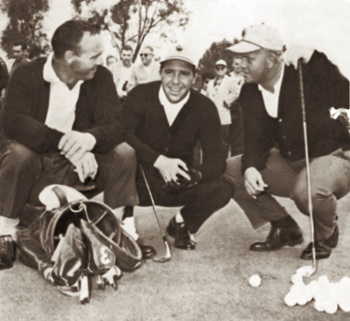 The NINE POINT GAME is made specifically for three players, and cannot be played any other way (with more or less players that is).  The nine point game is a three player game where each hole consists of nine total points.  Each player plays their own golf ball and at the end of the hole the nine points are divided among the players based on how they finish against their competitors.  There are only a few ways that the points can be divided up on each hole.

How are the points split up in the Nine Point Game:

Typically with the nine point game every player will win at least one point per hole, even if they finish last.  The only time that a player does not win any points on a hole is when there is a blitz.  A blitz in the nine point game is where a player wins the hole out right by two or more shots.  For example, players 1 makes a par, and the other two players make double bogey.  Player one would win all nine points on that hole (the definition of a blitz is to win more than normal points) and the other two receive no points.  The blitz in a nine point game is rare and can be a costly mistake for all players involved on the losing end.

VARIATIONS OF THE NINE POINT GAME:
There are only a few variations to the nine point game that I have ever played.  The most common variation is when players double the points when one player makes a birdie.  The split is still the same, but the points would double.  For example, player 1 makes a birdie, player 2 and 3 both make par.  The normal split on this hole would be five points for player 1 and two points each for players 2 and 3.  However, when birdies double you are up to ten points for player 1 and four points each for players 1 and 2.  Everyone’s points double on a hole where a birdie is made, not just the player with the birdie.

Players can also play a PRESS – REPRESS version of the Nine Point Game.  In the press repress version the honor on the tee is very important.  The player with the most points, not the lowest score on the previous hole, ties off first.  Then the player with the second most points, and then finally the player with the least amount of points.  Only the player with the least amount of points can press the hole, he can press the hole up to the moment that he tees off.  This is a huge advantage when playing press repress as you get to see your playing partners hit their shots prior to laying on the press.  This means that the low man in points can double the points on that specific hole (a press only stays on for that particular hole and comes off on the next tee box).

The repress portion of the game comes into effect for the player with the most amount of points.  When the low man presses the player with the most points can repress the hole putting on another press.  Meaning all points are now on two multipliers.  A repress by the points leader must be made on the tee just after the last player hits.  When there are two presses on a hole the points are doubled and then doubled again.  Therefore if player 1 makes a 4 and players 2 and 3 both make 5 the points would normally be five for player 1 and two points each players 2 and 3 but with a press and a repress on the hole we have to double the points twice.  So we go from 5 – 2 – 2 on the normal scale to 10 – 4 – 4 for the first press and then 20 – 8 – 8 for the repress.  As you can see press repress can get the points up there fast and furiously, so use your press powers carefully.  You will also notice that the middle player is along for the ride, and has no choice of when a press is made or control over the repress.

As with almost any golf gambling game there is a game press option for the player or team that is loosing.  Only the player who has the least amount of points can press the game.  When someone presses the game this means that every hole played from now on is doubled.  If you are playing press repress you could have up to three multipliers on each hole, and a birdie would add another multiplier.  The math gets tough but just remember how many multipliers you have on, and start from the beginning and add each press, repress and game press to get your points total.

90% of fights on the golf course come from bad math, and its typically not from adding up your score on the hole, but the points won in which ever game you are playing.  The nine point game is really the only thing that I can think of to play when you have three players in the group.  The key points to remember when playing the nine point game is that each hole must have a total of 9 points or a multiple of 9.  If you add up the scores on the hole, divy up the points, and you have 10 total…something went terribly wrong.  Also remember to bring up on the first fairway (after you have teeed off and argued over handicaps and what the wager will be) whether or not you are going to play the Blitz portion (win by two shots or more and win all nine points) and the birdies double rule.  This way there is no discussion on the fact that a birdie doubles the points after a birdie is made.  Always better to be safe then sorry.

Next time your buddy calls you ten minutes prior to your tee time and lets you know then that he is not going to be able to play golf because his wife has a honey do list set up for him, don’t worry so much, its a perfect day to play the 9 point game.