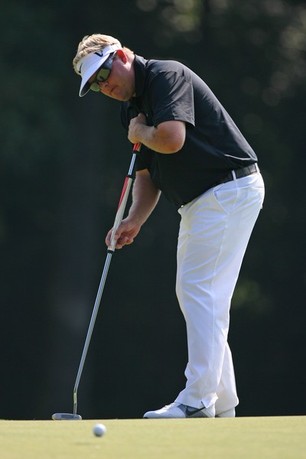 This is the last week prior to the PGA Tour FedEx Cup Playoffs.  I never thought that I would be as excited as I am to watch post season golf.  The Wyndham Championship is the last chance a PGA Tour player has to get into the top 125 on the points list and qualify for the playoffs.  Here is a link with the offical rankings currently for the FedEx Cup Playoffs… there are a few more big names near the bubble than you would have imagined.  Guys like Gary Woodland and YE Yang, John Daly, Tevor Immelmen and Retif Goosen are near the cut and need a good week in order to jump them into the top 125.

Carl Petterson is a name that I am getting very good at spelling. I have written about him in my PGA Tour recaps now for a good portion of the 2012 season.  Carl ties the course record yesterday at Sedgefield Country Club with a -8 under 62.  Why he played so well… he kept the ball in play, hit his irons well, and putted well, according to Carl…is that all we have to do Carl?  I love that Carl uses the broomstick putter which is how I am going to denote a long putter that is not a belly putter.  Too many emails from my fellow Chicago Golfers trying to figure out what the difference is and just saying a long putter is no longer safe to use as some folks think of a long putter now as the belly putter…but I digress.  Carl putts like a mad man with his long putter.  He has a very unique stroke to say the least.  He seems to swing the putter around his body and really roll over the face of the putter (similar to his regular golf swing), and it seems to work for him.  His putter can get really hot, and a hot putter on the PGA Tour is the difference between a good season and a great season…just ask any PGA Tour player.

There were other great scores on Thursday like Carl Petterson’s college roommate at NC State Tim Clark.  Tim Clark is also an advocate of the broomstick putter, and with a round of 63 one off the course record I would say the broomsticks have it right now.  I wonder when the USGA is going to step up and say one way or another if the “long” putter is good for the game or not?  Who’s to say.

The Big Break’s Tommy 2 Gloves Gainey also had a great opening day at Wyndham with a -4 under 66 but being that Tommy is 105 in the FedEx Cup rankings he doesn’t have to worry about making the playoffs.  Webb Simpson our US Open reigning champion and first time defending champion on the PGA Tour (he won the Wyndham Championship last year) also had a good opening round -4 under par 66.  Nice to see Webb bounce back from missing the cut last week with a good opening round on Thursday.

Lots of big namers out there getting in one more tournament prior to the PGA Tour Playoffs and I for one am excited not only for another great week of golf from the PGA Tour, but to see the guys that don’t get a ton of TV time fighting it out to get into the PGA Tour post season.