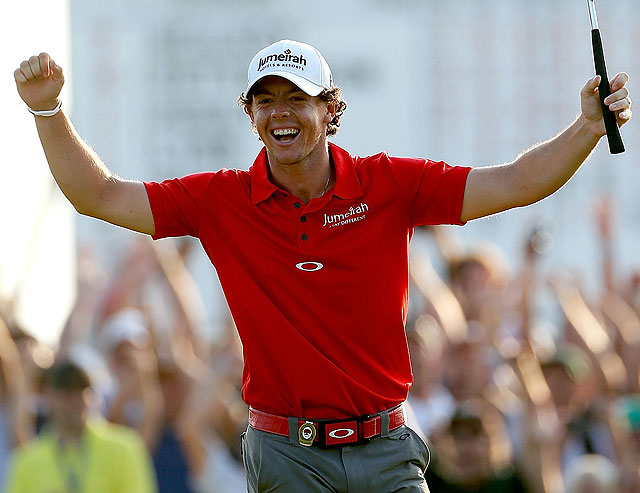 Rory McIlroy wins his second major championship at the Ocean Course at Kiawah in record setting fashion.  His -13 under and eight shot win over the rest of the field is the largest margin of victory at a PGA Championship, beating Jack Nicklaus’s old record of a seven shot margin.  Rory also becomes world #1…again, and rightfully so as he is a multiple major winner, and both of his major wins he blew the field away.  Rory is also only one of two players to have multiple major championship under the age of 30 that are currently still playing on the PGA/European Tour.  Throw in that he is one of the youngest multiple major winner, and we have a new era of golf, right or wrong.  Everyone in Chicago knows that I am a huge Rory McIlroy fan and I am always pulling for him.  I find Rory to be a great champion, great for the game of golf, and an ambassador to the game that we desperately need.

PGA CHAMPIONSHIP WEEKEND RECAP:
With the third round being delayed because of the weather on Saturday, I find it hard to blog about two rounds on a major Sunday. So we are going to bunch this fantastic weekend into one post.  With that being said, it was a wild weekend.  On Saturday morning we had the most winning-est player still in the game on top of the leader board, and looking for win #15 (majors that is).  Tiger Woods has been in contention for the last three major championships.  He was the 36 hole leader in the US Open, only a few shots back at the Open Championship, and the 36 hole leader at the PGA Championship.  For any other player that would be a great accomplishment, but for Tiger Woods we all see it as a fault.  Can Tiger still win a Major…Has Tiger Woods lost his edge…Will Tiger ever win again…is Jack Nickalus’s major record safe…the answer is yes, no, yes and no.  He is still young, he is still in his prime, he is still the Tiger Woods of old, he just not bullet proof anymore.  Not only have we found that Tiger Woods is human, but he is a little hard on himself.  To open his Saturday round at Kiawah he played the first 8 holes +4.  For Tiger Woods leading a major championship this is unheard of (as long as you don’t count the previous two majors).  Tiger has had some trouble on the weekends, especially on Saturdays ultimately playing himself out of the tournament.  I think that stopping halfway on Saturday was also detrimental to Mr. Woods, as he needed to get out there and grind out a round, and he can’t do that from the clubhouse while play has been suspended.  Tiger will get his 15th major, and it could be as soon as the Masters in a a few months.  But as for right now, he is going to have to wait until next year to try to beat history.  I for one will still be rooting for him.

Ian Poulter had a great weekend, and an even better start to his fourth round on Sunday afternoon.  Ian manages to birdie 6 of the first 7 at Kiawah on Sunday to get within two of Rory.  A bogey on nine followed by two more birdies  on 11 and 12.  Ian was coming down the stretch hot on the heels of Rors.  However a slew of bogeys coming down the stretch took IP out of the running…well the bogeys and the fact that Rory went en fuego.  I am a firm believer of Ian Poulter being the most under rated player in Europe and possibly all of golf.  He is a phenomenal putter, he hits a lot of fairways and greens, and I think that this year with his record at the major championships could mean a break through 2013 with a major win.  We could also see Ian holding up the FedEx Cup and the $10,000,000+ check at the end of the 2012 PGA Season.  That is if he can keep the pressure up on his game, and continue to make a ton of birdies…just without the bogies.

Other great notables on Sunday would be:
Justin Rose finishes in a T3 with a 66 on Sunday and one round away from a major win.  With scores of 69-79-70-66 we can see that the weather bested the Englishmen this week on Friday.  Falling victim to the harsh weather conditions on Friday, where the scoring average was 78, could mean that Justin’s game was just a hair away from a major win, and the first Englishmen to hold up a Major Championship Trophy in many years.  The last British born Major Champion…Sir Nick Faldo.

2012 Major MVPS Graeme McDowell and Adam Scott.  Neither a winner this year at major championship but both players finish in the top 15 at each and every major championship in the 2012 season.  Graeme and Adam never sniffed the very top of the leader board but both played very well at the PGA Championship.  To play all four majors and find yourself no worse than theT15 is an amazing feat and something that shows that these two players will be battling it out for majors for a long time to come.

Keegan Bradley our 2011 break out major champion finishes at -4 under par and a T3 finish.  Keegan played well all week but like Justin Rose succumbed to Friday’s weather and despite a 71-68 finish on the weekend the 77 on Friday really knocked him out of becoming the first back to back winner at the PGA Championship since Tiger Woods did it in 2006 and 2007.  Still a great tournament for Keegan, and I am sure he will soon follow Rory McIlroy as a two time major champion before he reaches the age of 40.

Golf’s last chance at Glory proved to be everything that the previous Majors were not.  Arguably the weakest major championship the PGA Championship is the last major of the year, and typically viewed as the least desirable.  Every golfer of any age finds himself on the putting green at night with possibly a school administrators daughter thinking to themselves that they have this 8 footer to win the…Masters or the US Open or the Open Championship and then maybe the PGA.  I would venture to guess that most of the Americans out there want to win the Masters, and the the US Open and then possibly the Ryder Cup and then their state championship and so on.  The PGA Championship needs more drama like it did this week at Kiawah were the course kicks some players butts and really makes the golfing world remember that the PGA Championship is a major for a very good reason.  I will bet my left arm that after father and sons watched this years PGA Championship that there will be a few more kids out on that practice green late this fall with more than a few putts to win the PGA Championship.  That is something that makes this Chicago Golf Guy very happy.