Friday in Memphis belonged to Rory McIlroy who despite his “rough ball striking” on Thursday hit the ball extremely well on Friday.  Rory had several kick in birdie putts that went in and a kick in eagle putt, that he missed. Rors also missed a little putt earlier on the day, but still manged to fire the second lowest round of the tournament with a 65.  JB Holmes did shot the lowest round so far of 64 to find himself in a three way tie for second behind the Irishmen with Kevin Stadler (65 on Friday with the long putter) and 2006 Memphis Champion Jeff Maggert.  Dustin Johnson continues to amaze us after a two month hiatus he finishes in the top 20 last week, and finds himself right in the mix with a second round 68.

Rory looked scarey good on Friday.  He looked like he did last year about this time at a little golf course called Congressional.  I am not saying that Rory will win this week, and next week (although I do believe he might) but if he keeps hitting iron shots the way he did coming down the stretch, there are not many folks who can contend with that.  Tiger Woods in his hay day didn’t hit iron shots that close on every hole.  I am looking at 3 or 4 footers that the defending US Open champ has for birdie or eagle.  Seriously the world #2 has game, and look out for him in California.  Who knows maybe the pre-major curse of no one wins if they win the week before peaking too early kind of thing.  Rory hits his drives straight and long, and his iron shots close, we are all in for another show (maybe not as dominating as last year) but a show none the less. 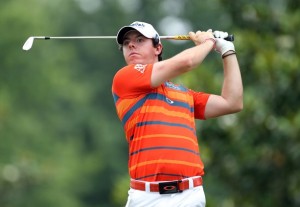