Holy Cow Batman, what a day two of the Cadillac Championship at the TPC Blue Monster at Doral (is that a new name?).  Bubba Watson not only buy’s classic television cars (General Lee), but he tweets more than any golfer should.  However, when you go out in these south Florida conditions on a course that is literally called a monster and shoot a 62 (two shots better than the closest competitor) I figure you can tweet anything you want.  Check out Bubba on twitter @ https://twitter.com/#!/bubbawatson  Bubba’s playing partner of the day was actually his closest competitor.  Justin Rose got around in 64 shots on Friday while “Just trying to keep up with Bubba!”.  Adam Scott followed a great day one with a very solid day two round of 68 to end up in third at -10 under.

From old number one to new.  Luke Donald put together two solid first rounds to get himself in the top 10, 6 shots behind Bubba.  Rory McIlroy stumbled a little bit in his first round, but righted the ship to get it to -4 under after day two.  Eight shots out of the lead, but still very much in the competition.  Tiger Woods finished day two just out of the top ten being at -5 under par.

Day three should be action packed and make for good television.  If you are stuck at work try watching the PGA Tour on PGATour.com’s LIVE@ section, where you can view the action online.  Not as good as the real thing, but for someone who works at a place where people scoff at the idea watching golf, its a way to get your fix! 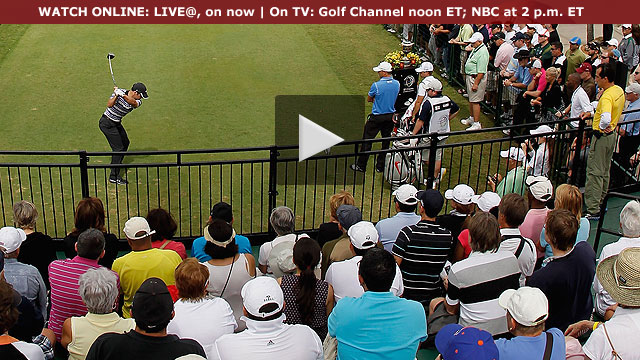