Round 1 Recap: 2012 Cadillac Championship. The Monster is Back!


Great first round action out at Doral in south Florida.  If you have not played south Florida golf in the winter (it is certainly winter for us folks here in Chicago), then you are missing out.  The Bermuda greens have a mind of their own, the rough is a totally different beast from blue or bent grass rough, and the wind is strong enough to blow away some of the smaller caddies on tour.  Add that to a course that goes by the nickname the Blue Monster, and you have yourself a golf battle of the fittest. I look forward to the rest of the week.

Our leaders after round one of the Cadillac Championship are a pair of putting eccentrics: the long putter (Adam Scott) and the super stroker (Jason Dufner).  Adam Scott shot his 66 with 24 putts (I guess its a little easier when you have a 45 inch putter, and anything inside the leather is good). Frankly I saw Scott miss a few 12-15 foot putts that could have gone in and really given Scott a huge lead and shaken up the blue monster.  Jason Dufner or Spalding as the rest of the golfing world prefers to call him, played a fantastic round of golf.  Seven birdies and one bogey (the 18th was his only bogey) to finish day one tied with the lead.  Dufner is mister cool calm and collected.  He always has a very low key demeanor, be it after a birdie, or making a bogey you really can’t see any ups and downs in his emotions.  That even keel typically means a very steady golfer in the biggest moments in golf.

Well as any golf blogger or television program that revolves around golf, you can hardly have a post where you do not mention Rory McIlroy or Tiger Woods.  The new #1 in the world had his first questionable round of the year and rightfully so.  You charge up to the top of the mountain, you get to the top, you need a moment to relax and enjoy that moment.  I have full faith in Rory that he will turn it up a notch for his second round.  Tiger Woods started the day just like he finished his Sunday round, with an Eagle 3.  The rest of his day was not as good, with just two more birdies in the day, and four bogies Tiger Woods finishes with an even par round.  I wonder if there is a stat or a record for back to back eagles on the PGA Tour? 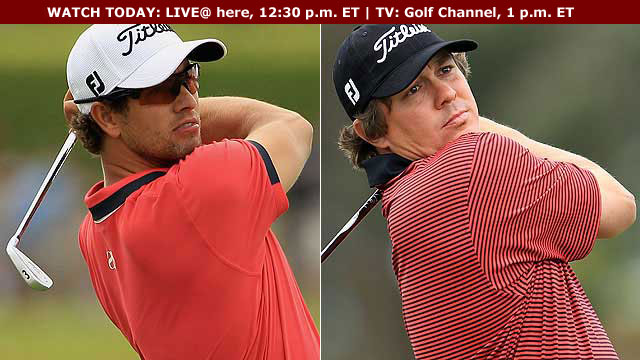