McIlroy and Westwood who will have a shot at becoming the new world #1?

McIlroy and Westwood book No. 1 eliminator

From ESPN.co.uk written by ESPN staff

Rory McIlroy and Lee Westwood will go head-to-head in their battle to become world No. 1 after they both won their quarter-finals at the WGC-Accenture Match Play Championship on Saturday. 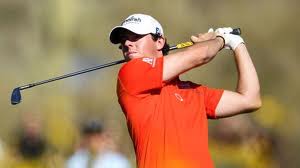 After Luke Donald’s first round exit on Wednesday, both players know they can become the top-ranked player in the world with victory at the Ritz-Carlton Golf Club in Sunday’s final – but only one of them will be left to fight for that prize after they contend in the morning’s semi-final.

Westwood defeated Scotland’s Martin Laird 3&2 to make the tournament’s final four, while McIlroy proved too relentless for the impressive Korean Bae Sang-moon as he closed out a triumph by the same scoreline.

Westwood fell behind to Laird early but changed the course of the contest around the turn, as he won four holes of five between the sixth and 10th to unsettle his usually calm and collected opponent.

Laird immediately picked up a hole at the 13th to return the score to two down with seven to play, but he made an absolute mess of the par-four 14th to give his opponent a comfortable advantage he would go on to drive home.

“He started how I wanted to start – I could have been three down after three but I wasn’t,” Westwood noted. “I didn’t give him any holes and just waited for him to hit some poor ones. He gave me a few holes and you can’t do that at this level.”

For much of the afternoon McIlroy’s match against Bae looked to be far tougher – as the South Korean refused to give his opponent an inch as they went blow-for-blow over the opening nine.

But eventually the high quality and unrelenting pressure of the occasion seemed to affect Bae – who has only limited experience of such stages – who began making small but significant errors, enabling McIlroy to turn a match that was all-square at the 10th into one that was all over by the 16th.

“I felt like it was some of my best golf of the week,” McIlroy said. “Apart from a few mistakes, I was able to build a lead and then hold onto it.

“He [Bae] is a very, very good player – but he probably didn’t play as well as he did the last few days.”

The Northern Irishman will now face Westwood – a contest that should have some extra spice even without the potential carrot of becoming world No. 1, as the pair reportedly fell out last year in a ‘feud’ that many suggest sparked McIlroy’s decision to change his management company.

“Yeah [he’s a friend], we’ve played a lot together in the past,” Westwood said. “Hopefully we both play well and both make a lot of birdies.”

“It was the match I wanted,” McIlroy added later. “I think it’s the match everyone wants to see. It should be a great battle out there and I know I’ll have to play my best.”

Elsewhere, Hunter Mahan will contest the other semi, after he comfortably beat compatriot Matt Kuchar 6&5 in the first of the two early matches.

Putting was the difference in the contest – Mahan was able to open up a comfortable early lead after successfully holing out from close range, as time and again Kuchar was let down by his belly putter, a club he has recently switched to.

Mahan has also changed his flatstick this week, but sticking with a more conventional model is reaping rewards for the man who nearly won last year’s FedEx Cup.

“He just couldn’t find the putter today,” Mahan acknowledged afterwards. “I made a few par putts early and got a few holes under my belt, and it was a matter of keeping calm from that.

“I’ve switched to a new putter this week, and boy has it given me a lot more confidence.”

There will definitely be an American in Sunday afternoon’s final, after Mark Wilson booked his spot against Mahan after he got the better of Peter Hanson.

The Swede looked unnerved by the relentless Wilson throughout the contest, eventually succumbing to a 4&3 defeat after failing to make anything of a couple of half-chances to get back into the contest on the back nine.

Wilson, an Illinois resident, is hoping to make his first Ryder Cup team this year in Chicago – and hopes his performances this week may have caught the eye of team captain Davis Love III.

“The way I’ve played this week gives me some confidence that if made the team I could do some damage,” Wilson said.