The Masters Tournament Final Round Recap 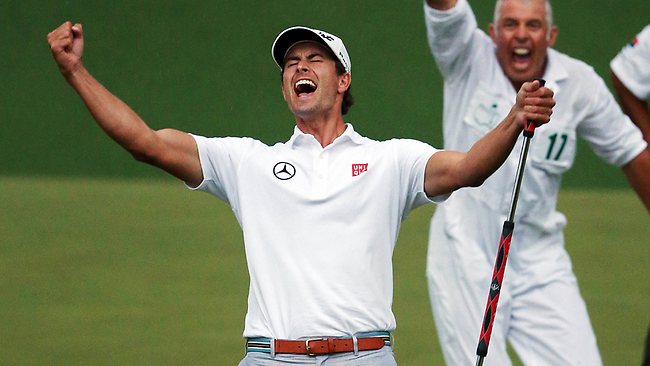 The final round of the Masters can be summed up into one word and it would be AWESOME!  What a finish.  The birdie for Adam Scott on the last hole had me jumping out of my seat and fist pumping for the guy.  I was ecstatic and honesty celebrating a little early as we still had one group left to finish.  Angel Cabrera knocks down the flag stick on the 72nd hole when he needed a birdie to tie Adams score of -9 under.

Which is better, the man who birdies the last hole to put pressure on the guy still on the course?  OR the guy who has to birdie the last hole to tie and get into a playoff.  Who ever you were rooting for it was a great sudden death playoff.

Angel almost chips in on the first playoff hole to close the door on Adam (I know he would have had a chance to tie, but I am sure that chip would have sailed past and Australia would have another heart breaking loss at the Masters).  Adam gets up hits a good solid chip, and makes the putt for par.  Angel taps in and we are off to the famous 10th hole and another second playoff hole for the Masters Green Jacket.

Adam again gets up and rips a driver right down the middle, Angel hits an iron only ten yards behind Adam.  Angel gets up and sticks his iron shot (a 200+ yard 6 iron) to within 15 feet.  All the pressure is on Adam Scott, and he fires one at the flag and puts it inside Angel.  Angel again leaves his putt on the edge of the cup, everyone thought it was going to go in just like the chip he hit on the first play off hole.  Angel taps in and the stage is set for Adam Scott.

We all know Adam Scott as the good looking perfect swinger from Australia who has not really lived up to his potential.  Not because of his ball striking but because of the flat stick.  Adam switched to the long putter and has had great success.  Last year he bogeyed the last four of the Open Championship to lose to Ernie Els, he even missed a 12 footer on the 72nd hole that would have put him in the playoff, and ultimately I think his name on the Claret Jug.

All Sunday long Adam was burning the edges of the cup.  A little short a little too hard, just off the right edge and just off the left.  Every putt he hit had a great chance, they were confident putts, but just a fraction of an inch off.  The guys who win majors make those putts go it.  Adam has never been able to get those few putts to drop coming down the stretch, until yesterday.  He missed putts all down the stretch, but on the 72nd hole the stars aligned and Adam makes a great putt to take the lead, and when he had a chance to outright win the Masters he knocked it dead center.

I think Angel is a great competitor, and the man can outright play golf.  I like to think of Angel as the most interesting man in the world who plays golf.  If that chip on the first playoff hole goes in, I believe we are writing a Jack and Jackie Jr. vs Angel and Angel Jr. article and everyone would love the story of a guy who has only three PGA Tour wins, and all three are major championships.  However, this is a story of a great player, who deserved a knock a few putts in and give Australia their first green jacket.  Congratulations Adam Scott, and USGA/R&A don’t read too much into the long putter, its not for everyone.