Tiger Woods: the Indian, the arrow or something else?

This past Sunday at the Barclays was one of Tiger Woods’ worst Sunday finishes.  With more three putts than most amateurs would like to count, the question is raised…should he change that putter?

I know that after every round that I putt badly I typically switch putters.  Right or Wrong that is what I have always done.  I switch to a mallet putter from a blade, I go to a belly putter, or a shorter putter, or a different color, I change the grip, or at the really rough times I have gone left handed.  But this is common right?  Not many players stick with the Bobby Jones mentality that you keep one putter your entire career.  Most players have a favorite putter or look that they go for, but use many different kinds of that one look.  If it is a mallet putter or a blade or an asner look, most players find something that they enjoy and then try different brands of the same putter model.

I think that it is fair to say that the Chicago Golf Guy has been and will more than likely always be a Scotty Cameron fan.  I have used a newport looking putter for most of my playing career.  I have tried other brands and manufactures, but I always pick up the newport looking putter every time I look around my local golf shop.  I guess it is the equivalent of always having a blonde or brunette girlfriend and sticking with that specific type.  Different girls but they always seem to have the same look.  I have always been a newport style fan, and I find myself 99% of the time using that type of putter.

So why bring this up with Tiger Woods?  Well Mr. Woods has won 14 majors and 74 wins, but each of those 14 major victories were done with a Scotty Cameron putter, and a good 90% (an estimate not a exact number) of his tour victories have been with that same Scotty Cameron putter.  Currently Tiger is putting with a Nike putter, that has the same look as his Cameron, but it has not produced as well I am sure that Tiger has hoped for.  So everyone is thinking why hasn’t he switched back?  When things go bad on the greens every good teacher will tell you to try something different.  Move your ball position, change your grip pressure, work on anything to get that flat stick going and when all else fails bail on that putter and try something else.

If I were Tiger Woods I would switch back to a Cameron putter.  I wouldn’t make a big deal about it.  I wouldn’t tell anyone.  I might even try to hide the switch by getting a blank circle T putter, or possibly put some lead tape to cover the Cameron name and keep the media from making a big deal about it.  I am sure that Tiger’s big sponsor, NIKE, does not want him to switch to a Cameron putter.  They have built a brand around TW and they have worked very well together in the past and will continue to do so in the future.  But Tiger is out on the PGA Tour for one reason and one reason only…to win Major Championships.  If Tiger Woods won 50 more tournaments, and blew the Snead record of most PGA Tour wins out of the water but did not win another major, he would not be happy.  He wants to win Majors like freshman golfers want to make the varsity team…more than anything in the world.

Tiger was the best putter in the world, and at that time he used his Scotty Cameron Newport putter.  Regardless of if he goes back to Scotty or sticks with his Nike putter, Mr. Woods needs to change something up to get that flat stick going.  I love to see Tiger win, and I want to see him break the Nickalus record of most majors won.  I am just not sure that he can do it with a Nike Putter.

Chicago Golf Guy’s Two Cents:  Change the putter Tiger.  No one will stop buying Nike putters if you stop playing one for a little while just to test the waters.  Plus I am pretty sure that if Nike was gonna dump you they would have already done it…so grab that Scotty that’s lurking in a closest of one of your many homes and break that bad boy out for the Ryder Cup and take back the #1 spot in the world of golf. 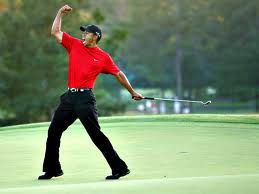