Since Walter Hagen’s 1922 breakthrough, there have been 89 Opens and 40 American winners, including the last two at Royal Lytham. Art Spander takes a quick trip through America’s impact on the Open 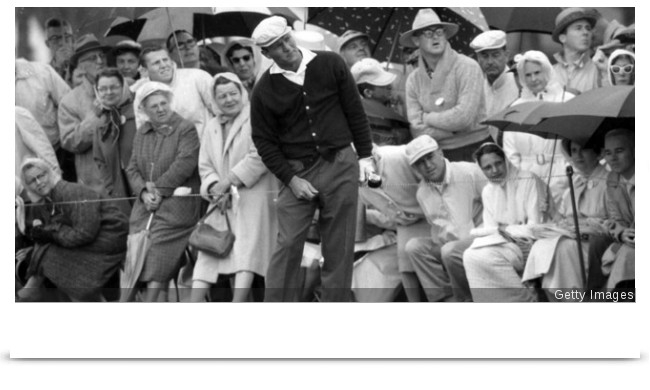 By Art Spander, Special to PGATOUR.COM

LYTHAM ST. ANNES, England – In a land of royalty, we begin with The King. Not of the nation but of the country of golf, Arnold Palmer. He believed in the Open Championship, in what could be described as a sporting manifest destiny, of Americans crossing not mountains but the sea, to accept a challenge and win a championship.

Since 1922, when Walter Hagen, also given a title that would fit in Britain, “Sir Haig,” there have been 89 Opens and 40 native-born American winners. That includes the last two at this year’s venue, Royal Lytham & St. Annes on the Lancashire Coast — Tom Lehman in 1996 and David Duval in 2001.

It’s different golf, on linksland, where the wind is stiff and the bunkers deep, as we’ve heard so unlike the manicured, well-watered courses on the PGA TOUR. And for a while, until the jet age, until purses were proper — Sam Snead won the Open in ’46 and lost money — too many U.S. golfers chose not to enter.

And then along came Arnie. Now with understandable exceptions, everyone enters.

Look at the roll call, the Hall of Famers — Arnie, Jack, Lee, Tiger, they’ve all won at least one Open, the four of them multiple Opens. There was precedent in the 1920s and ‘30s.  Hagen, the Arnold Palmer of his era, so suave and charismatic, won four Opens while Bobby Jones, the last amateur to come in first, won three – including 1930 when he swept the U.S. Open and Open Championship and the respective Amateurs, the original Grand Slam.

“I could take out of my life everything except my experiences at St. Andrews,” said Jones, who won the 1927 Open on the Old Course, “and I would still have a rich full life.”

Jones also triumphed at Royal Lytham in 1926, the first time an Open was played on this course of history but not of beauty — the entire layout, away from the ocean, encircled by brick and wood Victorian buildings.

Gene Sarazen, the Squire, got his Open in ’32, and he was followed by another American, Denny Shute in ’33. The Great Depression was taking its toll in the United States, and in Europe, evil forces were at work, making war inevitable. The Open closed down.

It restarted again in the first full year of peace, 1946, at the home of golf, St. Andrews. You could take the train all the way into town those days — now it stops at nearby Leuchars Station — and as the story goes, Snead, never having played a links, looked out the coach window and said, “Say, that looks like an abandoned golf course out there.” Naturally he won, and yet still had to point out, “We couldn’t plant potatoes in a field like that back home.”

Ben Hogan wasn’t kidding the one year, 1953, he came over, to play at Carnoustie. Wearing one of those little wool country caps and turtlenecks, Hogan won. And, no, according to John Huggan, the writer from Scotland, Ben never was called, “The Wee Ice Mon.” That, according to Huggan, is an incorrect American idea about the way the Scots talk.

The way Arnie, the King, always has talked and played is, “Let me at ’em.” There was no backing away. He would do what others could not, or at least try.

Palmer won the Masters and U.S. Open in 1960. He remembered reading about Jones’ Slam and about Hagen going to England and not only winning but, with the help of Prince Edward, forcing the snooty members at Royal St. Georges to treat pros as, well, professionals and not servants.

“I felt that if you were going to be a champion,” Palmer said, “you couldn’t be a champion without playing in the Open and hopefully winning the Open.” He played. He didn’t win, that year, coming in second to Kel Nagle.

But Palmer would win the next year at Royal Birkdale where the weather was brutal — wooden soft drink boxes blown around in a gale — and against his caddy’s advice, he made a shot so magnificent, a 6-iron from out of a bush onto the green at what then was the 15th hole, a plaque was installed.

And ever since, the best of American golf knew it had to be a part of the Open.