Three shots and Troy Matteson is what will separate Steve Stricker from his fourth John Deere Classic.  I keep expecting Troy Matteson to fall off the summit at the Quad Cities, but he keeps surprising me with exceptional golf.  Troy just keeps pouring in the birdies and continues to be a thorn in the side of Stricker’s attempt at a fourth win at the Deere Classic.

Steve Stricker will not go quietly into that good night though.  With rounds or 65, 67, 66 (which incidentally has kept his scoring average at 65 for this tournament the last 15 rounds) he is only three shots back of Matteson, and we all know that Stricker wants this win more so than any major he has played in.  Yes, I believe that this Sunday round will be the defining moment of Strickers career.  I do not believe that any other player alive will have a chance to have four wins in a row.  That is a bold statement, but true.  No one can dominate a specific tournament for four years in a row anymore.  With the players getting better and better each year, and younger and younger, we find ourselves with a void of a dominating player.  We rather find ourselves with a plethora of players with the ability to dominate the game except for the fact that there are too many.  I equate the PGA Tour talent pool to the size of the Ocean.  There is no more big fish in a little pond, but a lot of huge fish, in a huge pond.  Not one player can emerge because there is so many players now with the talent to do what the likes of Nickalus, Palmer, Hogan, Woods, and Mickelson have done in the past.  These players will win tournament after tournament, but no one will have a chance to win four in a row for a very long time.

But this Sunday will not be all about Stricker and Matteson, lets not forget the quiet man Zach Johnson.  Zach is the poster boy for one of my favorite quotes – Speak softly, and carry a big stick.  Mr. Johnson is one of the best putters on tour, and he is a scary ball striker when he gets hot.  Combing solid shots with a hot flat stick, and ZJ can surpass the hot player at the Quad Cities, and the Mayor of the Quad Cities with a great Sunday round.

No matter what happens today at the TPC Deere Run, we are going to see someone take down history, or go down in history as the man to break a giants tyrannical rule over the Quad Cities. 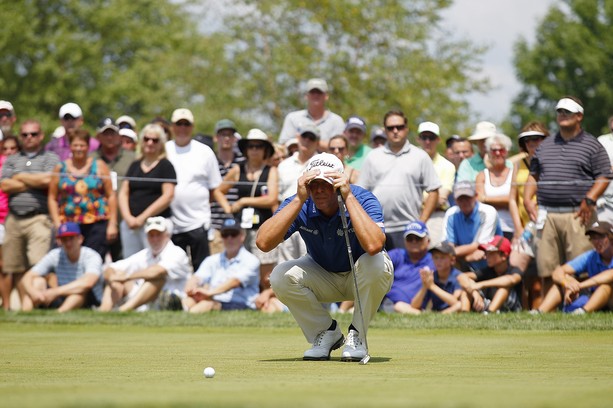