My Thursday predeiction of higher scores on Friday, didn’t really pan out.  There was a 62 by PGA Tour rookie Charlie Beijan (his carrer low), and several 64’s by the likes of Spencer Levin, and Brendon de Jonge, and too many mid to high 60’s to even blog about (good thing I am going to blog anyways).

The story of the week I think is three fold.  One US Open reigning champion Webb Simpson, our belly putter champion of San Fransisco’s Olympic Club comes in with a 66 (birding the last hole) to be our 36 hole leader.  Well almost 36 hole leader, as there are still a few guys out there that have to finish, but pretty sure Webb will go down as the 36 hole official leader.

We also have an all American top 10 leader board save for Chalie Wi.  The American’s came out to play at the Greenbrier on Friday with everyone in the top 10 having two under par rounds minus Robert Castro (71 on Thursday) and Chalie Beijan (70 on Thursday 62 on Friday).  A very nice fourth of July patriot leader board in West Viginia with the Americans really going out and playing well.  Keep up the good play lads.

The third and final story of the week so far is the big names missing on the weekend.  Phil Mickelson misses the cut for a second time in a row at the Greenbrier Classic with a pair of 71’s on Thursday and Friday.  Not sure if Phil is just not a fan of the Old White but two years and two missed cuts seems to me that he cannot be a huge fan.  Tiger Woods also missed the cut this week with an opening round 71, and a Friday round of 69.  Tiger made plenty of birdies on the Old White, but couldn’t keep bogey off of his card.  The roller coaster rounds are not what Tiger Woods is known for, but as soon as the media starts talking about Tiger being back, it seems that he slips a little bit.  Now don’t get me wrong I’m a huge fan of Tiger, and he is playing great.  He has three wins this season, is going to make the Ryder Cup team on his own, #1 in the FedEx Cup race, and world #4: but I hate to see him win at Memorial, and stumble at the US Open.  Win at Congressional at the AT&T, and then fall flat at the Greenbrier.  The only nice thing about Tigers up and down year, is that since we are at a low, he might hit a high for the British Open???

A nice little shout out to local favorite Kevin Streelmen.  With a wonderful 68 67 start to the Greenbrier Classic, he is very much in contention for the weekend.  Possibly could see Kevin’s first PGA Tour win? I would really like to see someone from Chicago take down a big tournament and Kevin is the man to do so. 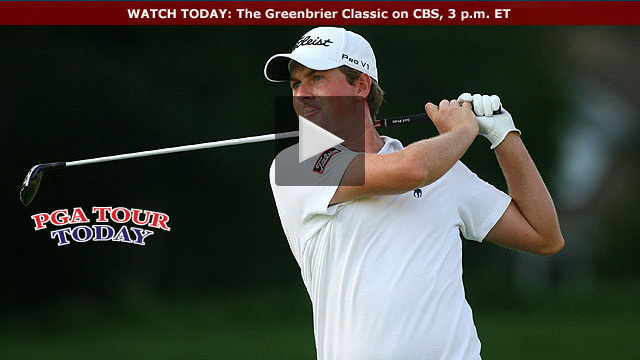