The Long and the Short of it…

The hottest debate right now in golf is to ban the long putter, or leave it be?  Being that I currently have a belly putter, and I am anchoring it now (I use to have a split grip putting style whenever I used a longer putter) I may not be the best person to give his two cents.  However, should there even be a debate?  In all the majors that have been played, there has only been one belly putter used by the winner.  The ratio of long putters to short putter wins is still heavily favored by the shorty’s.

So whats with all the fuss about long putters, because they are out of the closets of old folks homes and into the bags of college kids?  I can see having a discussion about long putters being banned if the results were different.  The long putter is more prevalent yes, but it is not winning week in and week out on the PGA or European Tours.  There are more pros trying the long putter, but I think that is just the hype right now.  The hot new thing to do is bust out a belly putter.  It is almost the cool thing to do. (and to think it started out on the Senior’s tour??!!) 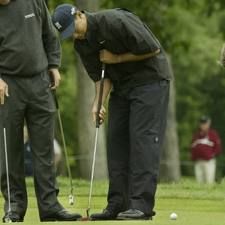 My opinion, let the three wigglers, and the knee knockers have their belly putters.  If there is an overwhelming outcry of purists out there who cannot stand the belly putter, and 50% of the guys winning on the PGA Tour are using a belly putter, then I can see the USGA looking heavily into the benefits of the long putter.  That is to say that the USGA could even prove without a reasonable doubt that the belly putter is illegal (but that is another post all together).

I want to end with everyone thinking about the belly putter in a different way.  When people stopped carrying 2 irons, and 3 irons for hybrids because they made the game easier (and there is not a doubt in anyone’s mind that it is easier to hit a 18* hybrid over a 2 iron) did the USGA try and put a stop to that?  Putting is a huge part of everyone’s game, and if we can find a way to make it easier (even if it is just a fad) should the USGA step in??? Just my two cents…

On a side note, could the USGA and the PGA Tour look into banning cheesy mustaches from the lime light of golf?  If we are going to debate on the future of golf, I am a firm believe that bad facial hair should trump the long putter trend.