The Nassau Bet is specific to golf, and I belive the term is not used in any other sporting event in terms of gambling.  The Nassau bet gets its name from the Nassau Country Club on Long Island, where the format was invented in the early 1900s by club captain John B. Coles Tappan. The game is also known as “2-2-2”, and “Best Nines.”

A Nassau bet consists of three bets: a front nine bet, a back nine bet and a total 18 hole bet.  Golfers are playing three different matches at all times and each bet is worth the same amount.  The most popular form of Nassau is match play, not stroke play.  Therefore, each hole is worth one point in the game to the player with the lowest net score. A push or tie on a hole means no one wins any points.  The nice thing about both match play and the three consecutive bets is a player can have a bad hole and it wont destroy all bets for the rest of the day.  A bad hole is just that, one bad hole, and we have the rest of the nine to try to get back that one bad hole.  A Nassau bet can be played as a stroke play event (with the lowest nine hole score winning that nine), but typically a Nassau bet is played in a match play format as it is easier to keep the game close.

The Side Game or the Press Bet:
It is inevitable when playing a three part bet, that some of the more degenerate golfers out there would like to get at least one more bet in the game.  A Press bet in a Nassau game is when Player A loses the front nine and wants to double the bet on the back nine.  All this means is that the back nine bet is now doubled, and the total bet stays the same.  You could however press both the back nine and the total bet at the turn if you are so inclined.  You can only press the bet when you are down, and a competitor can decline a pressed bet.  However, declining a press is greatly frowned upon and will more than likely get you banned from further games and disinvited to the next member guest tournament.

***Remember that whatever the original bet is will be the same for all presses.  For example if the bet is $5 $5 $5 (the wager for the front nine bet, back nine bet, and total bet) then any press is worth that same amount.  In our example any press would be worth $5 never any more or less.*** 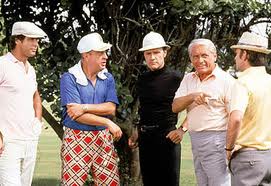 Automatic Two Down Presses:
One last variation on the Nassau bet is automatic two downs.  An automatic two down bet means that if at any point within the nine you are two down, there is an automatic mid round press.  This is like a slaughter rule, but reversed.  Typically a slaughter rule is in place to keep the winning team from killing a losing team.  Not so much in golf.  With automatic two down presses, the losing player cannot stop the bleeding so to speak and just take their beating.  They have to man up and not get murdered or lose their butt to their competitor   Two down presses is not for the every day golfer, but more for the degenerate golfer looking to kick a man when hes down.  Two down presses are great if you are on top, but its a mother when you are off your game and taking it on the chin.  Typically, if i find myself in this situation I fake an injury on the 10th hole like my good pal Al Cervik, and hope for a great substitute.

The Nassau Golf Bet is one of the most popular and common gambling bets made in golf.  It is easy to play, and without all the presses and variations is normally a wager that keeps everyone in the game all day long.  The next time you walk up on the tee, ask your playing partners if they want to play a Nassau, if they look at you like your crazy you are probably going to win enough for a free lunch after your round.  If your playing partners ask you if you want to play automatic two downs… slowly back up and say no you misunderstood me I said does anyone wanna stay in nassau?  I have a great time share there.  Trust me it will save you from a trip to the ATM after the round.